Since November 2016 Ukraine’s State Food and Consumers Service registered nine outbreaks of highly pathogenic avian influenza (AI) in Kharkiv, Odessa and Chernihiv Oblasts. In the first months of 2017, several countries imposed restrictions and even banned Ukrainanian poultry and egg imports, this has had dire consequences.

Although the outbreaks of Avian Influenza didn’t directly affect major poultry regions and were far from the assets of the country’s major poultry producers, the virus did however cause havoc to Ukrainian poultry exports. As of 20 March a full ban was put in place by Yemen, Iraq, Jordan, Qatar and China, while imports from these regions where the outbreaks were detected also led to restrictions from the European Union, Saudi Arabia, Hong Kong UAE, Moldova and Belarus.

The last AI outbreak in Ukraine occurred months ago, but speaking at the recent press-conference in Kiev in March, Volodimir Lapa, the head of the Ukraine’s State Food and Consumers Service, stated that in the coming months AI risks will be increased, primarily because of the spring migration of wild birds. The last time Ukraine faced an avian influenza epidemic was in 2008, however, at that time the effect was very limited, primarily because the country’s poultry industry was not producing as much poultry as it does now. The industry was hardly producing sufficient quantities for domestic demand and export structures had not been well-established. 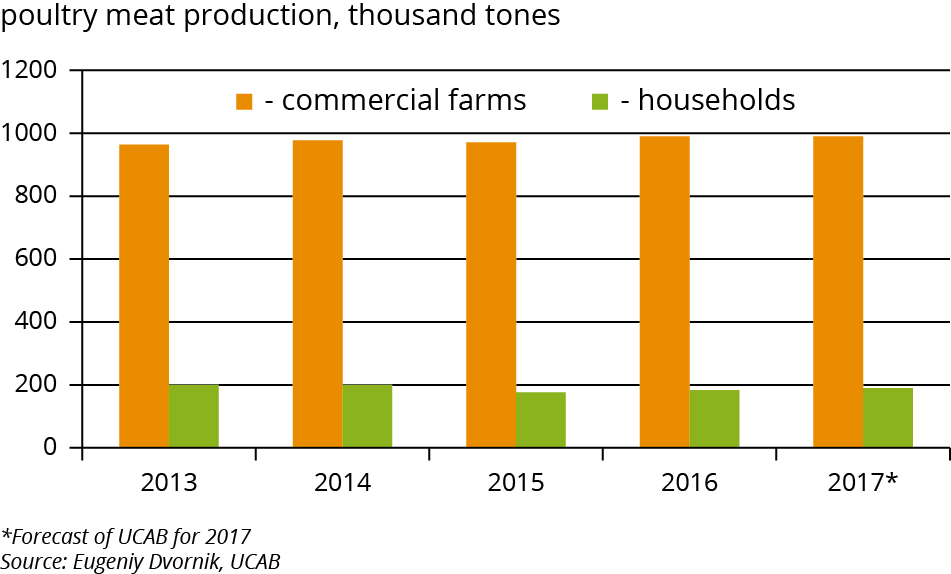 Over the past few years export grew and became more and more essential to the country’s poultry industry. The further spread of AI could bring serious challenges to the domestic industry. Eugeniy Dvornik, an adviser on the agricultural market in Ukraine’s Club of Agricultural Business (UCAB) told Poultry World that export has been driving the growth of Ukraine’s poultry industry over the past years and it will most likely drive it further in 2017 and beyond. He estimated that over the past several years, Ukraine produced some 1.1 to 1.2 million tonnes of poultry meat per year, saying that a wide range of export markets and team work between business and government helped to open up new markets. He stated that because of this, poultry production performance in 2017 will be higher compared to 2016.

Nevertheless, in the case of spread AI, both the production and export of poultry meat might suffer. Dvornik added that at the moment the Ukrainian poultry industry consists of a mix of commercial farms and backyard farming. The share of backyard production does not exceed 15% of the industry’s total production performance.

Also, Oleg Katerynych, the deputy director for Science in the State Research Poultry Station at the National Academy of Agrarian Sciences of Ukraine told Poultry World that despite a small decrease in production performance within the country’s poultry industry over the past few years, growth could be predicted for the near future, primarily because of the commissioning of the new production capacities in Vinnitsa and Kiev Oblasts. According to Katerynych, in the coming eight years the industry will be able to add production capacity for nearly 180,000 tonnes of poultry, primarily broiler meat. Also a slight increase in the segments of duck, turkey and goose meat production is foreseen.

According to the Ukrainian Statistical Department, exports of poultry meat from Ukraine during last six years increased 3.7 times – from US$ 78.7 million in 2011 to US$ 291 million in 2016. The pace of export growth didn’t slow down even after identification of the first outbreak of AI in Kherson Oblast. In November, the European Union banned the import of poultry meat from Ukraine. After the country applied for regionalisation in January 2017, some trade with regions not affected with AI was possible again. At the same time, Ukrainian poultry producers realised that further AI outbreaks might impact Ukraine’s poultry export in the course of the year. Producers already had a taste of possible consequences when Iraq placed a full ban on imports coming from Ukraine. Iraq was the largest buyer of Ukrainian chicken over the past years.

At the same time, the negative effects of the Iraqi ban was even more dramatic for Ukrainian egg exports, because Iraq accounted for almost half of Ukraine’s foreign sales. This fuelled the fear for a wider AI-related ban and its serious negative impacts. In a year that the egg production industry was not doing well in economic terms anyway, this could have serious implications. In monetary terms deliveries of table eggs fell 1.7 times to US$ 45.47 million compared to 2015, 14.5% to 50,680 tonnes. In the category of egg products exports rose by 7.8% to 3,570 tonnes, but in monetary terms it also reduced by 1.6 times to US$ 29.87 million. However, at the beginning of 2017 export volumes showed some signs of recovery both in natural and monetary volumes.

Dvornik expresses fears that the world trade volumes of poultry meat are under pressure due to a global emergence AI. He sees increasing trade protectionism for the months to come. In the EU this may lead to increasing standards for chicken production and putting in place minimum standards for imports too. This will favour products from Eastern Europe above those from the Ukraine. Luckily Dvornik sees that nowadays Ukraine’s main partners for trade are countries from Asia, with 44% of the total export of poultry meat in 2016. Iraq leads the pack, followed by Hong Kong and Jordan. Dvornik adds that the ongoing Chinese supply shortage will continue to affect global market conditions. Exports to China and Hong Kong are expected to remain high, benefitting countries that already have business contacts in these countries.

Despite export potential, the past years were marked with the financial problems of the leading country’s poultry and egg manufacturers, associated with the political instability and rising production costs. According to Katerynych, the key challenge of Ukraine’s poultry industry is the rising cost of energy, fuel and compound feed production, which is coupled with the low purchasing power of the country’s citizens. This puts profitability of the industry under pressure. According to estimations of the State Research Poultry Station, the level of profitability in the egg segment is high, while in the poultry meat segment it has been negative for several years.

Unfortunately, the profitability of the poultry meat segment remains weak, even amidst the strong increase in retail prices, which could be observed in the country over the past three years. According to UCAB, the retail price level rose almost two fold, compared to early 2013, when it was about UAH 20 per kg of broiler meat to UAH 39 per kg of broiler meat at the end of 2016. Market participants note that in hard currency the price was rather unstable, primarily because of the fluctuations in the exchange rate of the country’s currency, the hryvnia. Since 2013 it depreciated nearly two times against dollar and euro, significantly boosting the profitability of export supplies, but reducing the margins in the domestic market. As a result of the weak buying power of the population, poultry manufacturers were very limited in the ability to increase prices over this period.

This primarily hit the country’s largest poultry producer MHP, which accounts for more than half of Ukraine’s poultry meat industry. The company suffered losses of US$ 412 million in 2014 and US$ 126 million in 2015. In 2016 the company earned US$ 69 million of net profit, thanks to the large-scale optimisation campaign. The poultry producer sold assets in Crimea including one poultry farm and one meat-processing plant for US$ 77.5 million, promising to invest these funds in the further expansion of more profitable production locations.

At the moment, the company aims to expand the largest European poultry operation in Vinnitsa and open a second meat-processing factory in Europe, in Slovakia. According to the company, the problems of past years were of a complex nature, and were associated with the acute shortage of hatching eggs in particular. The company suffered excessively because one of its poultry farms, Shahterska Nova, was located on territory that was captured by pro-Russian rebels in mid-2014. The company lost this asset and this brought serious turbulence across holding’s operation. Shahterska Nova supplied a significant share of hatching eggs to MHP farms all over Ukraine.

In the egg sector, despite the high level of profitability, the largest market player Avangard also reported financial problems over the past few years, as in 2014 the company a net loss of US$ 26.92 million, in 2015 this figure increased to US$ 158.39 million. The company has not revealed the financial performance for the complete 2016 yet, but in the first nine months of 2016 losses amounted to US$ 38.77 million.

Other market participants are able to mitigate losses in some part thanks to the large-scale state support. The country’s government has allocated UAH5.5 billion (US$ 202 million) of financial support for the agricultural industry in 2017 and a large part of this money will be directed towards poultry producers. The new country’s budget rule stipulates that every year the government should allocate 1% of GDP to support agriculture – it is believed that the volume of state aid for the poultry industry should grow.