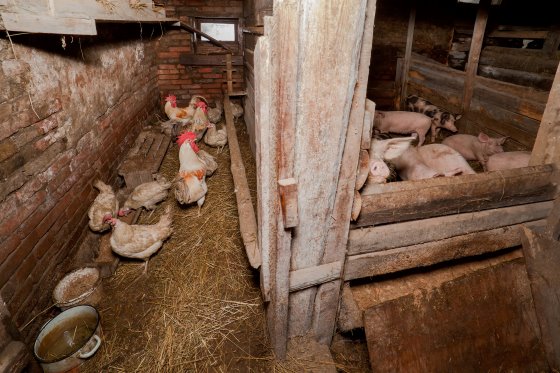 Dankvert shared his views on the federal TV channel Rosiya24 recently. He added that in 2016, in Russia 233,000 heads of pigs were culled as a result of African Swine Fever (ASF) outbreaks. Calling this figure ‘very huge’, he pointed to backyard farms as a cause, since they lack good biosecurity.

A backyard farm in Russia, keeping pigs and poultry in one shed. Photo: Verevkin | Dreamstime.com

About 6,500 culled pigs came from backyard farms, Dankvert said, and mentioning that ASF outbreaks in 2016 affected 211 backyard farms. He concluded that in that case, on average backyard farms would contain about 30 pigs.

According to Russia’s veterinary legislation, backyard farms form a special category of pork production facilities, as they lack rights to sell pork to customers. In other words, they can only produce pig meat for own family needs.

In theory, backyard farms therefore cannot contain that many pigs, so Dankvert said it is clear that these farms must have been engaged in selling of pork to markets. He concluded that a shadow market must have been existing in Russia’s pig industry over the past years. Dankvert spoke of a ‘parallel sector’, where the country’s veterinary rules in fact are not operating well at all.

If registered as backyard farm, Rosselkhoznadzor’s veterinary inspectors will not enter these farms. The result was ASF spreading across the country rapidly, Dankvert explained.

He said in general the country’s pig industry is suffering losses as a consequence of these producers, calling it a ‘serious issue’.

30 billion rouble loss due to ASF

In total, since the first outbreaks in 2007, Russia’s pig industry suffered 30 billion roubles (US$500 million) of losses due to ASF, Dankvert said. He added that this is likely not to be the exact figure, as a lot of indirect losses, such as missed profits due to shutdowns, have not been included.

Dankvert added that last year, Rosselhoznadzor revealed first 12 cases, in which meat of pigs that had been infected with ASF, were used in meat processing. These cases were investigated and each of them received appropriate assessment.

Dmitry Rylko, general director of Russia’s Institute of Agricultural Market Studies (IKAR) told Pig Progress that in his opinion ASF is a very serious issue for Russia’s pig industry. He said, the main threat now comes from backyard farms and wild boars, the population of which has grown significantly over past years.

It seems that the only way to deal with this challenge is to ensure absence of pigs in backyard farms as well as wild boars in a certain radius around large professional pig farms. However, this measure is much easier said than done, Rylko said.