Increasing exports to non-EU destinations have led to booming pig prices in the first half of 2016. The question is whether this economic recovery is structural. Even now, margins are just over break-even. Whether the long expected profitable years have come, depends on many factors, especially external factors without much influence of the pig sector. Relying on the export opportunities to third countries, however, is too risky. 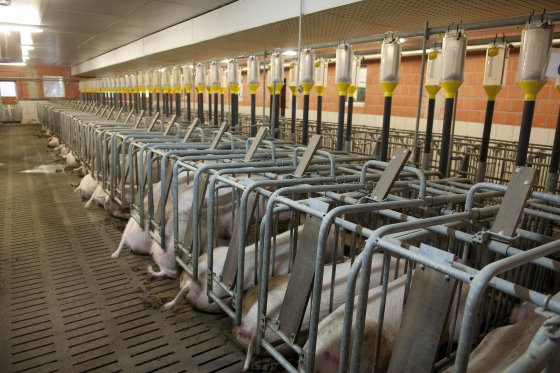 The total world pig meat production amounts to some 110 million metric tonnes per year, of which about 20% is in the EU. Less than 10% of the world production is being traded between trade blocks (like the EU, China and the USA). The rest is being consumed domestically. However, within the world trade, the EU is an important player, with some 65% market share. Though, only a limited part of the EU production is being exported.

The self-sufficiency in the EU of pig meat without offal amounted to 112% in 2015. This figure has seen a clear rise, as in 2009 it amounted to only 106%. This means that export has doubled in that period. The offal however, which are hardly consumed in the EU are very popular in countries like China. The self-sufficiency of pig meat including these products is higher and increased from 114% in the first quarter in 2015 to 119% in the first quarter of 2016. The increasing self-sufficiency is caused by an increasing production and supported by a slightly decreasing consumption.

The increasing production is caused by the growing performance of sows, showing an annual increase of about 0.4 piglet produced per sow per year. For a constant market supply, the number of sows should be reduced with about 2 to 2.5% every year. This however does not happen in practice, at least not consistantly. Between 2010 and 2013 the number of sows decreased with some 3-4% annually. In 2013, 11.47 million sows were registered in the main EU production countries. Between 2013 and 2015 however, there was no reduction in sow numbers. Between 2015 and 2016 a reduction was found of 3.9% of the sows.

The reduction in the years before 2013 was probably related to the upcoming group housing obligation. In 2012 and 2013, the market price for slaughter pigs was not that bad, which is logical, given the reduced supply of pigs for slaughter. So there was no market force to further reduce sow numbers. With an equal number of sows and increasing piglet production per sow, the total pig production then increased and so did the pig meat production. As there is no production quotation or mechanism to control sow numbers in the EU, reduction typically takes place after a time of low prices and profitability. The latest reduction, between 2015 and 2016 is a consequence of the economic low in 2014 and 2015.

Figure 1 - Development of sow numbers in the EU’s most prominent pig countries. 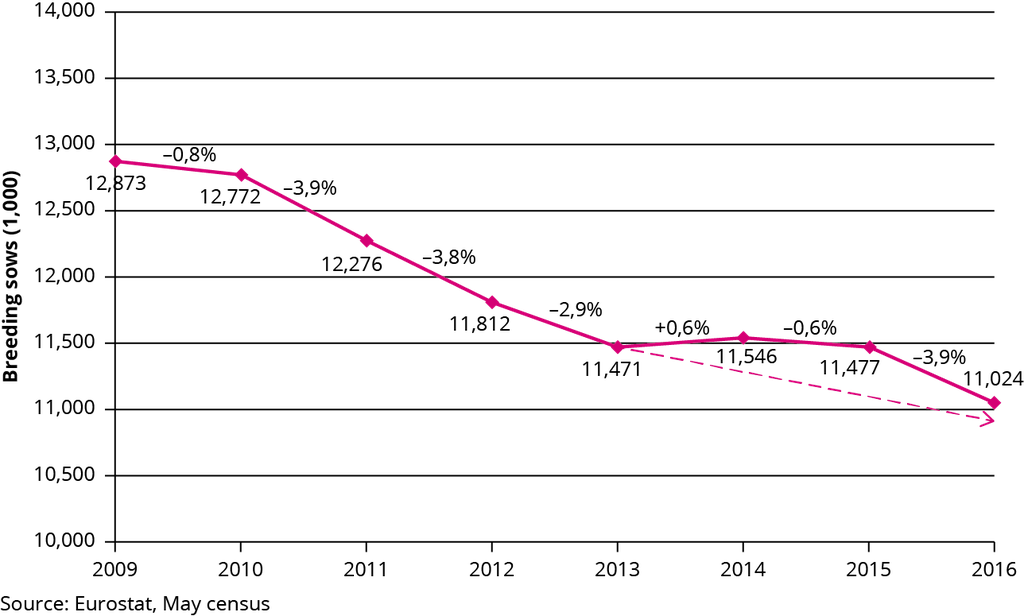 The EU is exporting pig meat products to over 100 countries worldwide. Up until February 2014, Russia was an important trade partner for the EU, with some 25% of the EU third market exports. However, this market was closed, both due to an outbreak of African Swine Fever along the eastern border of the EU and due to the political ban after the Crimea war. However, the Russian ban is not the main reason for the low prices since the summer of 2014 to the spring of 2016, but rather the firmly increased pig meat production in the EU.

The firm price increase since early 2016 was caused by an unexpectedly rising demand from China. Large numbers of sows have been taken out of production in China, after some unprofitable years in a row, and farms have been closed since they didn’t comply with environmental legislation. This caused the sudden shortage in pig meat supply on the Chinese market. European and American exporters are happy to fill this gap.

In June 2016 the market price in China amounted to some €3.60/kg carcass weight, far higher than about €1.60/kg in the Netherlands. The big demand from China pushed the price. Even products that are typically low-priced, but exported to China, now are well priced. Chinese importers pay €2.20/kg for pig feet, which is higher than the €1.80/kg for legs to the Italian quality market. Exporting to China caused European prices to increase. In the Netherlands the prices increased some 35% between February and July 2016.

Apart from that, 2 other factors pushed the European market prices. On one hand this is the rather weak euro compared to the US dollar, which is positive for European export, and on the other hand the reducing number of sows in the EU, resulting in lower supply of pig meat.

The strong demand from China was quite a surprise for many. The Chinese government monitors the economic development of the pig sector. An important parameter here is the so-called hog-to-corn ratio: the price ratio between hogs and corn. When this ratio is about 6, farmers can produce at break-even. If the ratio is lower, profitability is low and the government may decide to purchase and store pig meat as to support the market. With a higher ratio pig meat is taken out of storage and sold, in an attempt to cushion price movements.

The Chinese government however, seems to react rather late, resulting in price volatility. In spring 2016 this ratio was about 7.5, but half a year ago under 6. The price for pig meat shouldn’t be too high in China, as it is a basic product for consumers. Pig meat price movements directly influence the economic situation of the country. And pigs are part of the culture, and it is said that having a pig at home brings happiness. In Chinese characters, a household or community is depicted as a pig under the roof.

The Chinese government expects a further decrease in self-sufficiency from 99 to 95%, as the increase in domestic production cannot keep pace with the increasing domestic consumption. This means a need for additional influx and opportunities for traders from abroad. However, one may doubt the stability of this export opportunity in the long term.

Should the European pig sector be dependant on export opportunities to e.g. China? European exporters feel comfortable now with this vast opportunity. However, several risks are related.

The risks of worldwide trade are various but realistic. Entrepreneurship is characterised by dealing with risks. Pig farmers, especially in Northwest Europe are used to dealing with risks. However, it is necessary to pay attention to it. The dependency on third markets has increased (due to higher self-sufficiency and more export), whereas risks have increased and are less controllable. In addition to this, the advantage of being a family farm has decreased, as farms have grown and own capital and labour are less relevant in cushioning profitability volatilities. So it must be concluded that the pig sector in Europe should be reluctant to an increasing dependency on non-European sales markets. It is advisable to reinforce entrepreneurship of farmers, to improve the ability to deal with price volatility, and to increase financial buffers of farmers.

The United States and the EU are bargaining on the Transatlantic Trade and Investment Partnership (TTIP). This trade agreement aims at an increased free trade between both trade blocks. Generally spoken, world trade is benefited by reducing trade barriers, like import tariffs or additional requirements. However, for pig meat TTIP might be less attractive for the EU, as the US has lower production costs than the EU. Even including transport costs over the ocean to Europe, US pig meat will be cheaper than EU domestic products. If the US could sell pig meat to the EU without any import tariffs, this would lead to a pressure on the EU domestic market price.

The negotiations however typically deal with the quantities of meat to be sold without tariffs, and the specific conditions, rather than a deal where all the pig meat from the US could be sold unlimited to the EU.

Irrespective of the TTIP, the EU will in the long term not be able to compete with large producing countries like the US and Brazil. So, is EU pig production then condemned to be a loser?

“If you can’t be a cost leader, you have to differentiate,” the American Harvard professor Michael Porter contended in 1980, as he compared different company strategies. A differentiation strategy aims for products that are not purchased because of low prices (even opposite), but because the product is attractive in itself. You won’t buy an iPhone because of the price, but because you want an iPhone. The price is not the decisive factor.

In several Northwest European countries a process is going on towards market differentiation. Actually this started a few decades ago already. Especially in the last few years, and supported by non-governmental organisations (NGOs), additional attention is given to e.g. animal welfare requirements, antibiotics’ use and environmental care. Retailers may distinguish themselves to competitors by particular market concepts, and with this demand-oriented approach, farmers are paid according to the additional specifications they deliver. It is however, necessary to attract consumers to purchase added value products and pay accordingly, rather than choosing commodity products.

A focus of the European pig industry on the domestic market, rather than on export, may reduce market volatility and increase profitability, especially if combined with the differentiation strategy. Even if the euphoria with regards to the current market situation would fade out, the pig industry will then be more resilient. Differentiation is an answer for the European pig industry to overcome an open world market. Leaning too much on export of pig meat to third markets is too risky.