Russian poultry producers are under pressure as product prices have been falling for the third year in a row, due to domestic oversupply. In response the government has adopted a comprehensive and ambitious programme for poultry export development. 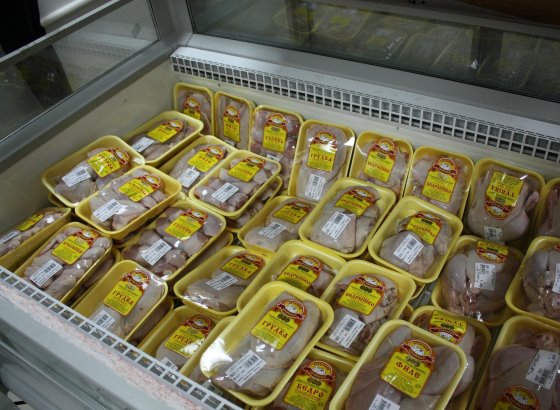 The country’s poultry industry is now caught in the perfect storm, as farms have to deal with rising prices for feed vitamins, while on the other hand the purchasing price of poultry at the domestic market slumped below Rub 90 (US$ 1.5) per kg. That is the analysis of Sergey Yushin, the chairman of the Russian National Meat Association presented in the in-house publication of the Russian government. The Russian Food Union (RFU) estimates that as of December 2017 the situation is even more grave, stating that the purchasing price of broiler meat had dropped to almost Rub 80 (US$ 1.35) per kg, or by 25% from late 2016.

Russian poultry producers deliver from 5-15% more poultry products than the domestic market can digest. For many poultry farms the purchasing price already matches their production costs, RFU added. Given this fact, small farms and producers with a high debt burden are forced to leave the market. Figures show that this trend will only gain momentum. The Russian Union of Poultry Producers (RUPP) has estimated that 30 poultry farms already went bankrupt in Russia in 2016 and it is believed that in 2017 this figure could be even higher. When the purchasing price at the market drops to Rub 75 (US$ 1.26), even the major poultry farms in Russia will face problems, Yushin has estimated.

In August 2014, when the food embargo was put in place, Russia was producing 26.6kg and consuming 29.3kg of broiler meat per capita, according to the data from the Agricultural Ministry. In 2017 the balance changed. Consumption grew to 33.5 kg, but the yearly production is expected to be 34kg per capita, according to the data from RUPP. The real problem is that there are still many new farms under the construction. According to some forecasts the production performance in the industry will jump from 4.85 million tonnes in 2017 to roughly 5.3 million tonnes in 2020, whilst the domestic consumption will stand still.

The situation in the egg market isn’t very different. RUPP forecasted that Russia would produce 44.5 billion eggs in 2017 and that also matches the estimations of the Agricultural Ministry. This amounts to 303 eggs per capita, while domestic egg consumption, according to the Ministry, today reaches only 285 eggs per capita and is not expected to grow in the years to come.

To fix the oversupply problem, Russia will have to triple the volume of poultry export by 2020, the number that is set in stone in the plan adopted by the Agricultural Ministry November 2017. Russia exported 121,600 tonnes of poultry in 2016 and should boost the supplies to 370,000 tonnes by 2020. In monetary terms export of poultry meat will grow from the expected Rub 10.8 billion (US$ 182 million) in 2017 to Rub 25.4 billion (US$ 428 million) in 2020, the Ministry said. To promote Russian poultry products in the global market space, the Ministry will undertake 16 steps, divided into the four main directions. The first is to enhance the quality of veterinary control, including the adoption of a single anti-epizootic programme at the federal level and the numerous similar programmes in the regions where the major production capacities are located. The main target of this measure is to tackle the avian influenza threat. It is quite a big problem for the Russian poultry industry nowadays, as the several outbreaks were registered in the country in 2017 and that last one was confirmed 20 November in Rostov Oblast, in the country’s Southern regions.

The second pillar is described as “the development of the transport infrastructure on the main export channels”. At the moment, most poultry exports are flowing from Russia via the Black Sea ports, but transportation is expensive. That is why the government plans to “reimburse part of the logistics and custom spends of the exporters” as well as to “reimburse the costs for the exporters in case of delays on payments for the products delivered to the foreign markets”, the Ministry said in the programme. Alexander Savrasov, the spokesman for the state agency Russian Export Center, told Poultry World that the goal of these measures is on the one hand to make export deliveries more attractive pricewise for the poultry producers and on the other hand to eventually make Russian poultry more competitive on price in foreign countries. He explained that giving the vast territory of the country, the transportation leg could be huge, so it is obvious that the government should compensate this disadvantage to the poultry farmers.

Markets that Russia wants to target are Asia, including China, Japan and South Korea, Africa, including Congo, South Africa and Nigeria and the Middle East, the Ministry said. For eggs, however, the geography of sales is expected to quite be different. The Ministry wants to develop export primarily to the countries of “the near abroad”, including Mongolia, Azerbaijan, plus the rebel republics in the east of Ukraine. Additionally, Russia plans to establish export of the dry egg processing products to the countries of the EU, in the amount of around 2,000 tonnes in 2020, the Ministry stated. From 2020 onwards Russia plans to export more than 6,000 tonnes of dry egg products per year. Aside from the EU, Russia will sell 2,000 tonnes in post Soviet block, 1,500 tonnes in Japan and 600 tonnes in China, the Ministry forecasted.

Russian analysts say that the target set by the Ministry is hard to meet. And the scepticism doesn’t stop there. The same analysts state that even when the goals are reached in 2020, it is unlikely that it will alleviate the tension on the domestic poultry market. Lyubov Burdienko, Commercial Director for analytical agency EMEAT informed Poultry World that Russia has facilitated visits of the veterinary commissions from 24 countries in 2017 alone. Furthermore it signed 31 veterinary certificates on export of poultry products with 14 countries. The list of countries the Russian veterinary body has agreed veterinary certificates with, include Azerbaijan, Bahrain, Brazil, Vietnam, Hong Kong, Egypt, Qatar, South Korea, Lebanon, Namibia, United Arab Emirates, Serbia, Saudi Arabia, Japan, Ms Burdienko added. However; “there is much less progress being made in actual exported quantities, than it was originally expected”.

Konstantin Korneev, the executive director for consulting agency Rincon Management, informed Poultry World that the price on export contracts ranges from $ 1.22 to $ 1.43 per kg of broiler meat. In Middle East, where many promising sales markets are located, most customers request chicken with small carcass weight from 1 to 1.2kg, while for the domestic market Russian farms normally grow bigger broilers with the weight starting from 1.6kg. The cost of production of broiler with the smaller carcass weight, is comparable with the cost for production of the bigger broiler, he noted. This factor significantly cuts the eventual margin of the farm on the deals involving such products.

All in all, Mr Korneev summarised, only a hand full of poultry firms in Russia will be able to make exports worth while. For most producers, export will only become economically attractive with a weakened exchange rate of the Russian Rouble. It ranges between Rub 57 and Rub 59 per $ 1, while should be between Rub 71 and Rub 75, he added.

Too little too late

Growing export to 370,000 tonnes by 2020 is a tough mission as it is and, more importantly, 370,000 tonnes of broiler meat would not be enough to alleviate the domestic market. Yushin estimates that an export of 500.000 tonnes is necessary to have some impact on domestic prices Mr Korneev also said that Russia should export around half million tonnes of broiler meat to change the balance in the domestic poultry industry. With respect to the egg export the situation is even more complicated, than with broiler meat, as Russia, in fact, is only in the beginning of the long road, he added. A source in a Russian egg exporting company, who wished to not be named, told Poultry World the country’s farms would be happy to get the export price of around Rub 230 (€ 3.2) per kg of dry processed egg products and Rub 60 (€ 0.86) per kg of liquid egg products without VAT. However, it is very unlikely that Russia will be really able to establish export of the processing egg products to Europe in large quantities, because of quality issues and the harsh price competition, among major exporters from the neighbour Ukraine, he admitted. In conclusion, the plans of the government for both meat and egg exports seem “a bit fantastic”. It is hard to understand how the Ministry plan extra exports if there is no clear picture of the demand for Russian products abroad.