All news / Lavrov Talks Up BRICS As US, EU Alternative

Non-politicized, inclusive fair trade being touted as a replacement to the West’s operational methods. Russia’s Foreign Minister Sergey Lavrov has been talking up the development of the BRICS grouping as an alternative to the traditional focus of the United States and European Union. 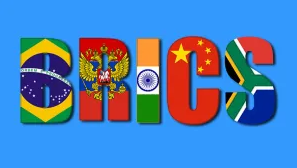 Speaking to participants of the 2nd BRICS International Youth Camp, Lavrov noted that the association preserves at its core “the general devotion to values of an equal dialogue and cooperation, mutual attraction of unique cultures and authentic civilizations” represented by various regions around the globe.

Member states of the BRICS association (Brazil, Russia, India, China, and South Africa) contribute significantly to the search of collective responses to multiple present-day challenges and threats and play an important role in the formation of the positive and future-oriented global agenda, Lavrov said on Tuesday (August 2).

“Our BRICS association is an example of a true multilateral and multipolar diplomacy, which meets the realities of the 21st century,” Lavrov continued. “Its member states play an important role in the formation of a positive and future-oriented global agenda.”

“The BRICS member states contribute significantly to the search of collective responses to numerous present-day challenges and threats using a solid base of generally accepted norms of the international law,” he noted. According to the minister, Russian pays particular attention to the significance of youth contacts within the framework of the BRICS member states’ cooperation.

“The development of cultural, educational and sports contacts are designed to strengthen further the atmosphere of friendship and trust between BRICS members,” Lavrov said.

“We traditionally pay a particular attention to contacts at the youth level. The interaction in this direction is an obvious proof of the stamina of the BRICS concept and its attraction,” the minister stated.

The BRICS nations contribute about 40% of global population and about 23% of global GDP. That is set to rise to about 50% of global GDP by 2040. Other countries have also recently expressed interest in joining, including Argentina, Uruguay, Morocco, and Algeria.

It is designed to promote trade and development ties between nations, yet doesn’t have mutual free trade agreements in place, being more a collective operating rather like the Commonwealth of Independent States. How BRICS evolves into a non-political, (unlike the EU) trade bloc is yet to be established, however increasing numbers of countries are expressing desire to wean themselves away from US and EU political interference with trade and move to a faster growing, less constraining trade environment.