All news / Layers in Siberia

Zarya poultry farm, near the Siberian city of Krasnojarsk is 100% Russian. That said, the hens and also the farm equipment stem from Western Europe. Poultry World took a look at the 1.1 million layers housed in non-forgiving Siberia. 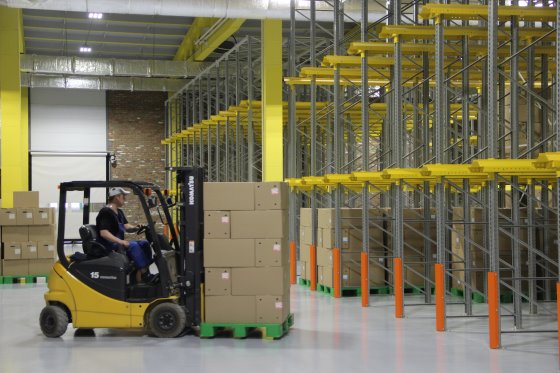 At the end of May the egg storage of Zarya poultry farm is close to empty. Only about 10% of the 15 million egg-storage space is in use. The sales are running well, explained deputy director of the poultry farm Tatjana Totskaya. The forklift driver moves a pallet with freshly packaged eggs to its designated place. Besides that, it is quiet in the immense warehouse. With dozens of rows of meter high shelves, the warehouse brings the Swedish brand Ikea to mind. Poultry farm Zarya has a long history. In 1960 they started with egg production, about 45,000 per day, at this location. The farm is located in the vicinity of Krasnoyarsk, the third city of Siberia. The winters are long and cold, it is not unusual that temperatures go down to -40oC and with a meter snow. In the summer, temperatures average about 20oC and crops and feedstuffs grow well.

With dozens of rows, meters high shelves, the warehouse brings a store of the Swedish brand Ikea to mind.

Since the turn of the century Zarya has undergone a full metamorphosis. In 2004 the company became part of the holding ZAO Nazarovskoe. A necessary step as the company hit bad weather due to mismanagement. The new owner appointed Igor Isaev as the new director. He reorganised the company and focused on modernisation and increased production. Mr Isaev’s approach turned out to be successful. Now with 1.1 million laying hens Zarya has become the largest egg producer in the Asian part of Russia. An entirely closed integration, with parentstock, a hatchery and a breeding poultry rearing establishment. Managing director Mr Isaev has become shareholder of Zarya, which is still part of the same holding.

The office and the entrance date from the communist period. Upon arrival at the company one sees a bust of Lenin, founder of the Soviet Union. Once behind the office, the image is suddenly completely different. On the many hectares of this large terrain, there are a series of hen houses. On the left there are rearing houses with space for 360,000 hens. On the right there are houses for laying hens, 11 in total, with a joined capacity of 1.1 million Dekalb White hens. A hen from the Dutch breeding company Hendrix Genetics.

At Zarya farm the houses for laying hens have been completely renovated. The old stones are reused in the new walls. The result is impressive; the houses look good. Photos: Kees van Dooren

Employees work hard on the maintenance of the terrain. Men with brush cutters keep the grass between the rows of shrubs trimmed and others remove weeds.

The houses for the laying hens have been completely renovated with the old stones reused in the new walls. These walls have not been rendered this time and the results are impressive; the houses look good.

The rearing and laying hens are caged, 6 tiers of cages. In Russia this is common due to animal welfare not being an issue here. The equipment and feeding technology is supplied by the German company Specht. Deputy director Ms Totskaya is the company’s nutritionist and veterinarian, when asked, she thinks the pullets look well and are in good condition. 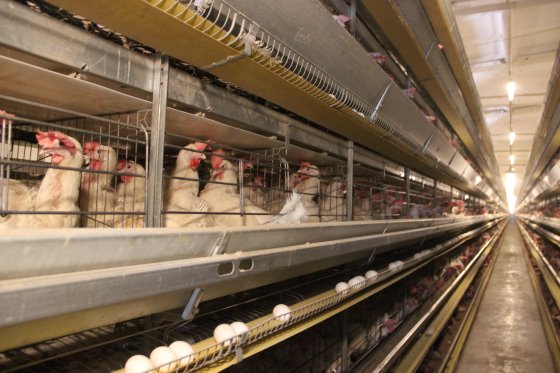 The German Specht supplied the house equipment. Genetics are from Hendrix Genetics. Twice a year Zarya receives 25,000 parantstock (including 3,500 cockerels) for the production of Dekalb White hens.

Everything in the house is very clean. An employee is sweeping the floor and a colleague uses a big brush to remove the dust that threatens to settle on the cages and egg belt. The spotless house is the basis for clean, bright white eggs. A transport systems takes all the eggs to a central sorting and packing area and a corridor, which opens into the packing area, connects the eleven houses together. The corridor is covered and heated to maintain that the temperature stays above freezing point.

The health status at the Siberian company is fairly high. With some reservations Ms Totskaya says the company is free of red mite. She knocks on wood, but so far this parasite is absent. Mycoplasma – the strains M.s. and M.g. – is controlled preventively by adding Tylosine to the drinking water. E-coli rarely leads to problems at Zarya. In Siberia, which is poor in poultry and has extreme winters, viruses only play a modest role.

Nevertheless, the company vaccinates against the following viral diseases:

The latter especially as a precaution. The Dekalb White hens jointly produced 235 million eggs in 2016. The company had about 1 million laying hens. The average annual production is 343 eggs per hen. The hens at the company vary in age. Due to this there are always eggs in varying weight classes. The average egg weight varies between 55 and 58 grams. The yolk colour is pure, that is the preference of the consumer in this part of Russia.

The feed contains no additives to influence the yolk colour. The feed also doesn’t contain corn as it doesn’t grow in this part of Russia. The laying hens are fed on a mixture of wheat, barley, sunflower, oats and soy, supplemented by a premix. The company feeds in 4 phases. They start with a starter. Then laying meal I, laying meal II and from the 64th week on a finisher feed. The feed without additives and corn result in light yellow yolks as can be seen when an egg sporadically falls off the belt.

The feed is purchased from the holding. The holding has a compound feed factory with a capacity of 280 tonnes per day. The holding also produces feed for the cattle and pig branches that fall under the holding as operating companies. The total price of the feed was € 250 per ton by the end of May, managing director Mr Isaev says effortlessly behind his desk.

Like many Russian poultry companies Zarya manages the egg sales itself. The eggs are sold to supermarkets and through their own stores. The enterprise has a strong focus on sales via their own stores. This channel is being expanded. Zarya opens stores up to 500km away in order to sell their eggs. A trader in neighbouring country Mongolia annually buys 12 million eggs. The distance between the poultry company to the Mongolian border is 2,000 kilometers. The route leads along Irkoetsk. There is no alternative. Every year, for export Zarya requests a veterinary certificate. There can be no more hiccups.

Egg production is usually profitable for the company in Krasnoyarsk. The selling price per ten eggs is 37 rouble (€ 0.58) on average. According to Mr Isaev the cost price of 10 eggs is € 0.55. Everything is included in the price. Interest charges are particularly high. The interest rate of a bank loan is about 16% and it must be paid back within a period of 5 years. Zarya borrows money through the holding. For the parent company it is easier to get funding and against a more favourable rate.

The house equipment and genetics come from Germany and the Netherlands. The German company Specht supplied the house equipment. The genetics came from Hendrix Genetics. Twice a year Zarya receives 25,000 parentstock (including 3,500 cockerels) for the production of Dekalb White hens. Parentstock originates from a Dutch grandparent stock company. These young hens and cockerels arrive by plane which takes 20 hours. Fortunately the poultry farm is situated next to the airport of Krasnoyarsk. Once landed the animals are quickly taken to their destination. Occasionally a charter flight is used to get the parent stock into Siberia. This way of transportation is much faster.

The Moba sorting and packing machine the company bought in 2013 is rather impressive. The processing line has a capacity of 180,000 eggs per hour. 8 women are working with the machine. 2 of them make sure the stock packing materials is replenished. The other 6 women stack the full trays in boxes. All staff wear yellow-green clothing, the company colours. The packers also wear sun visors. Zarya is the Russian word for sunrise.

The Moba sorting and packing machine the company bought in 2013 is rather impressive. The processing line has a capacity of 180,000 eggs per hour. Eight women are working with the machine.

After the lunch break the packers get back to work, there is not much time for a chat. The egg flow seems endless. However, this does not stress the employees out. They continue doing their job and know the end is in sight. They have been doing this for a long time and this is reflected in the ease with which they handle the full trays with eggs and how they place them into the boxes. It happens so rapidly but smoothly, which makes it look as if it takes very little effort. The eggs receive a stamp with the company name and the production date. That is all the information the Russian market requires. An infinite wave of eggs continue to impress. Huge belts transport them from the 10 hen houses to the packing station.

Ventilation/heat for summer and winter

Housing and equipment is of the usual sort and automated where possible. Ventilation is a combination of inlet valves with channel ventilation. 2 rows of valves are attached to the house’s side walls. In the summer fresh air enters both via the valves and the ground channel. The extractor is placed in the ridge. In the winter the valves remain closed. A coal-fired power station is located next to the company. This supplies warm water to keep the temperature in the hen house steady. During the long Siberian winters, temperatures plummet to -40oC. Heating is a necessity then. The climate control equipment is set to keep the temperature above 16oC. This is the minimum temperature required in the houses.

Spent laying hens are slaughtered in their own slaughterhouse, which is also part of the Nazarovskoe holding. Meat sales is also in hands of Zarya, as is the sales of eggs. Apart from grandparent stock, the chain is completely closed. The dried chicken manure is spread onto the lands of the holding which is dried in the house, on the belt. The holding processes 75,000 hectares. Zarya invested in renovation, expansion and automation since the appointment of director Mr Isaev. Nevertheless, the company is not finished yet, Mr Isaev explained. The demand for eggs is higher than the production output. As such the company is expanding continuously. The ultimate goal is to keep 1,6 million hens with a daily production of 1.3 million eggs. The 11th house for laying hens was put into use at the end of May. But that is not all, the old office which dates from the Soviet period will be transformed into a hatchery. This is scheduled to take place this year. Finally, there will also be a new slaughterhouse for the spent hens. The investments are made through own resources, the state only subsidises the keeping of parentstock. This adds up to an amount of half a million rouble a year, at current exchange rate not even € 8,000.