All news / McDonald’s in the cross hairs

Animal welfare groups have targeted the iconic golden arches of McDonald’s in a bid to improve the lives of chickens in its supply chain. Poultry World reports. 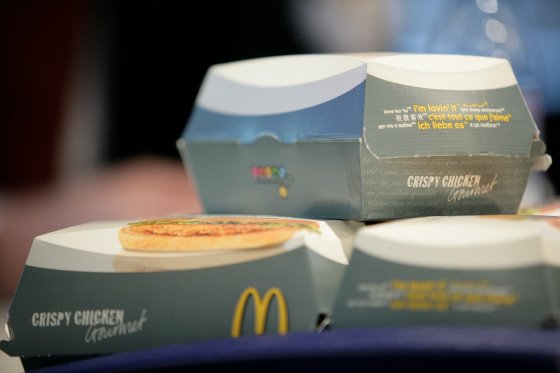 Readers of the New York Times probably choked on their breakfast McChicken sandwiches when they saw a full page open letter advert from welfare groups to McDonald’s in their paper. The letter, signed by six global welfare groups, accused the company of allowing its suppliers to keep chickens crammed in warehouses for their entire lives, unable to behave naturally. Bred fast and large, the welfare groups pointed out that if a human baby grew in the same way, it would weigh in at a massive 660lbs at just two months, the equivalent of two giant pandas. Many of the birds are unable to support the weight of their own bodies and suffer leg pain and heart conditions.

Out of step with consumers

Most broilers in the US now grow to more than 6lbs, more than twice as large as in 1955, and the entire process takes 23 days fewer than 60 years ago. The welfare groups point out that nearly 90 other food companies, including Burger King, Subway, Jack in the Box and Dunkin Donuts have established specific and meaningful reforms for their suppliers. These include giving the birds more space by 2024. The Coalition, which includes Mercy for Animals, Animal Equality, Compassion in World Farming, Compassion over Killing, The Humane League and World Animal Protection, is calling upon McDonald’s to:

Matt Rice, Mercy for Animals president, said: “As long as McDonald’s allows its suppliers to breed birds to grow so large and fast they can’t even walk without pain and overcrowd them inside dark warehouses, the company will lag behind its competitors on animal welfare. “McDonald’s must acknowledge that extreme animal cruelty has no place in a civilised society. By failing to adopt a meaningful chicken welfare policy, McDonald’s is out of step with consumer expectations and business trends.”

In a white paper produced to coincide with the launch of the campaign, the welfare groups say: “The narrow focus of the modern broiler industry on productivity and efficiency has resulted in major welfare concerns and suffering for billions of broiler chickens every year. Current standards and policy fall short of the basic welfare requirements for broiler chickens as determined by extensive research. “The science has also made clear that animal welfare is a complex concept and that its adequate assessment requires a comprehensive approach that addresses the importance of health, affective states and natural living. The interaction and interdependence of these three aspects of welfare cannot be overstated. “Walking ability, for instance, which is significantly impaired in common commercial breeds, is affected by genetic selection favouring fast growth, but other factors also contribute, such as poor litter quality, high stocking densities and dim lighting.” It adds that while a focus on outcomes, such as measuring levels of hock burn or assessing feather cover, can provide more accurate information about the actual welfare state of an animal, the role of inputs cannot be ignored.

The extensive research on the correlations among genetics, environmental inputs and welfare outcomes underlines the need to implement adequate thresholds for environmental provisions, especially those that severely affect aspects of broiler welfare, such as litter, light, stocking density and environmental enrichment. Alongside these crucial improvements to the environment, a shift to alternative breeds with greater potential to thrive in better environments is essential, adds the report. Welfare groups in Europe are calling for similar action to boost broiler welfare through the EU Broiler Ask. Kenny Torella, Mercy for Animals director of communications, said the two campaigns had some differences and similarities: “Their asks on breeds, stocking density and ammonia levels are the same and their lighting is almost as good as ours, except that their six hours of darkness can be broken up, while ours is continuous. “Their litter ask is almost as strong as ours but doesn’t include the same monitoring that we ask for. “The main difference is that they allow “effective electrical stunning without live inversion”. We do not,” he stressed.

McDonald’s announced in October a global commitment to source chickens raised with improved welfare outcomes over the next six years through:

But animal activists said this did not go far enough, particularly over the silence of moving to slower growing breeds. At the end of March, McDonald’s launched its advisory council, which includes a mixture of key suppliers and genetics experts, advisors like FAI Farms, NGOs, such as the World Wildlife Fund and leading academics, including Dr Temple Grandin and Dr Harry Blokhuis. The multi-stakeholder group will provide expertise, diverse perspectives and advice to McDonald’s on the implementation and evolution of its chicken welfare and sustainability strategy. Dr Nicola Robinson, veterinary surgeon and senior manager for global sustainability at McDonald’s believes the global council “is unique considering its membership and diversity, and will provide guidance for the welfare outcomes we will use across our global supply chain and the progressive targets we’ll set.”

Moving to slower growing breeds of course will push up the price of poultry meat. The National Chicken Council says it is committed to improving chicken welfare but has warned of increased costs and environmental impacts if the industry moves to slower growing birds. Tom Super, NCC spokesman, told the Chicago Tribune, “It has been well-documented that a 100% shift to slower growing breeds and decreased stocking density would have negative grade-offs for the environment and increased prices for chicken, without the assurance of better welfare outcomes for the birds.” Some poultry companies are already taking action to produce slower growing birds – such as Perdue Farms – to meet increasing demand. How large the demand will be and how quickly changes will come, remain in the hands of the king – the US consumer.