All news / On-farm in Russia : Lipetsk 8, a modern swine facility 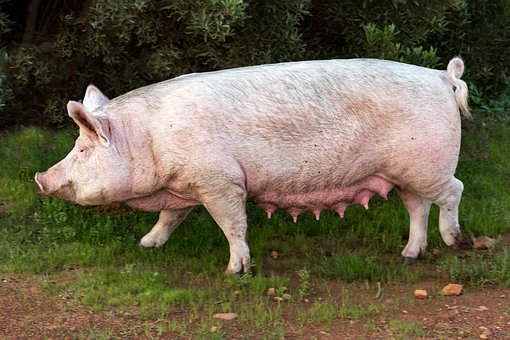 Distant views, endless clouds, fertile land, hardly any villages and straight roads for miles on end. When driving around in Lipetsk region, one can start to imagine Russia’s incredible potential, as this is only one of many regions in the largest country in the world.

One of Cherkizovo’s most recent production locations is the breed-to-wean facility Dankov Lipetsk 89 (or short Lipetsk 89) located at about 30 km from Dankov, Lipetsk region. In fact, the facility consists of two farms in one location (Lipetsk 8 and Lipetsk 9), being each other’s exact mirrors. Both can house a total of 6,750 sow places on either side, leading to a total of 13,500 sows.

The complex has one entrance and one central feed delivery point, after that there are separate entrances for Lipetsk 8 and Lipetsk 9, and also the production is strictly separated. The complex was built in 2016 and first gilts arrived in February 2017. The farm looks modern and clean from the inside, with remarkably few insects around. Overseeing the production in Lipetsk 8 is farm manager Oksana Bazan.

On the outside it resembles a typical US facility with its white farm buildings, large set-up and huge fans. Coming closer, however, features can be seen which are typical for Russia in 2019. For one, the farm site is surrounded by fences, so feed trucks have to deliver their load outside the fences into silos.

Upon entrance Lipetsk 8, identification has to be left behind and a uniformed security officer checks every visitor and pockets have to be emptied to make sure nothing unwanted gets on-site or leave the facility. Next is a change of footwear, and in the subsequent building, a mandatory shower. The photo camera has to go through half an hour of intensive UV treatment.

All precautions of course are related to African Swine Fever (ASF), more on this in part III on biosecurity – to be published on Friday, August 3.

Each room on the farm is equipped with 2 complementary climate control systems, one for the summer and one for the winter. In summer, temperatures can rise to above 30ºC in a relatively short timeframe, for which the evaporative cooling systems are installed. Winters can be long and harsh, and for that, each room is equipped with gas heaters, which can send heated air through each room.

Brad Heron, director of the pork division at Cherkizovo, describes Russia as a ‘country that is great in implementing work’. Once given clear instructions, Russian workers usually follow these meticulously. Hence, all over the farm there can be found bilingual instruction sheets. As long as anybody’s responsibilities are clear and in writing, all work gets done.

In total, 22 rooms with 52 farrowing pens are devoted to farrowing. The piglets are weaned at 20 days, after which they are sent to Cherkizovo wean-to-finish locations. The farm produces piglets of roughly 6 kg which then will be sent to own grower-finisher locations. The majority of the 214,136 weaner pigs (2018) will be sent to farms in a 50 km radius around one of the company’s packing plants. Male piglets do not get castrated but will receive a treatment with immunovaccination (Improvac). All piglets are vaccinated against PCV2 and mycoplasma (as long as the bacteria is not phased out). Notably, the farm is applying needle-free vaccination. Amoxycillin is used when a situation asks for it.

Sows are fed a pelleted mixture of mostly wheat and soybeans, supplemented with corn, sunflower cake and peas. Most feed comes from Cherkizovo’s extensive land masses (the integration owns 237,000 ha of crop land) and is subsequently processed in its own feed plants. The feed is administered to the lactating sows by hand, that way the employees can keep a close eye on whether or not the animals need something extra. In the farrowing rooms, there is round the clock staff available.

In total, 6 rooms are for gestating sows. Mr Heron says, “We do not breed or feed returns, pregnancy check negatives or P3+ late weaners. We manage to a strict non-productive day budget and benchmark that so this strategy does not come at an additional cost.”

Right at the beginning of the gestation rooms, there are about eight pens with sows, kept in groups. Quite a lot of them have blue spots on their heads. “They are parity 1 sows, they get marked,” explains Mr Heron. “We’ve run some trials and we found out that they can do with an extra bit of feeding after they’ve been weaned for the first time. That’s why we keep them here for 3 weeks on free feed. Brings us one pig per litter extra.”