All news / Optimism and innovations at Pig & Poultry Fair

UK producers have enjoyed decent returns of late and visitors’ smiles reflected this. The mood of optimism was mirrored by positive comments from exhibitors during the 2018 edition of the Pig & Poultry Fair, held in Stoneleigh Park, UK, 9-10 May, 2018. 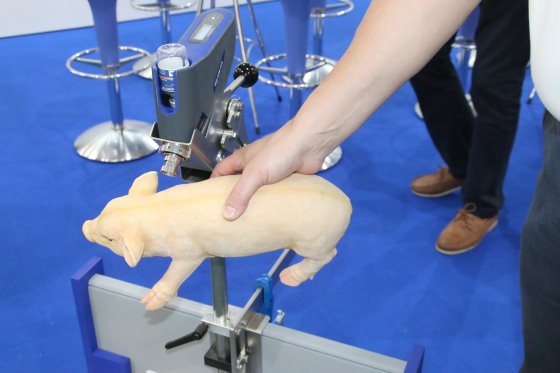 The United Kingdom leaving the European Union (also known as Brexit) was of key concern to producers and it was very interesting to note that in a seminar on the topic (standing room only) attended by 100 producers only one was pessimistic about the UK leaving the EU.

There were many new products on display – more than 50 new concepts made up the New Product Innovation Trail.

A camera above the pigs

Technology is being used more and more in pig production, to minimise manual work. In the past calculating finisher pig growth rate meant regularly weighing pigs which was both time consuming and stressful to both pigs and people. Fancom’s eYeGrow technology was developed on a Shropshire farm and which incidentally gained the premier award for this year’s innovations and does the same job by means of a 3D camera located above the pigs.

The camera continually monitors the animals and feeds information back to a computer to accurately calculate weights. The data which is available on computer, iPad or phone, will show in real time any dips in daily liveweight gain (DLWG) which could be attributed, for example, to a feed or water blockage or a health problem. In the UK, the guide price for the eYeGrow box is about £1,250 (€ 1,430) + value added tax.

AM Warkup were exhibiting similar technology in the shape of ProGrow, manufactured by Skov.

Dust and how to solve it on pig farms

Dust is a big problem on units both for staff and their pigs. It’s amazing how much dust is generated when feed pellets are blown into bulk bins and of course this is far more of a problem if the feed is in meal form.

This dust accumulates on the bin base and attracts unwelcome guests such as vermin and birds. Collinson were awarded a prize for their Cyclone One dust collector, which gets rid of this problem. The equipment is mounted on the silo leg and is connected to the exhaust pipe via a hose. Dust which is generated during pneumatic filling is collected in the cyclone and is removed by simply opening a slide at the cyclone’s base.

As antibiotic use is being reduced more reliance will be placed on vaccines to keep pigs healthy and anything that can be done to make this task more efficient and less tedious has to be welcomed. Ceva Animal Health’s SmartVac is an automated vaccination device which delivers a dosage of between 0.5-2.5 ml.

It’s vital the injection is given at right angles to the skin, otherwise the vaccine may end up absorbed in subcutaneous fat and not be effective. Significantly, the SmartVac will only deliver the vaccine if it’s at the right angle to the pig’s skin. Ceva has an app which records all vaccinations over time. This is an extremely valuable management aid as traditional recording methods can be prone to inaccuracies.

Hipra was demonstrating its Hipradermic needleless vaccinator along with its Hipradermic hands-free bracket. The bracket can be mounted on a pen division and allows the gun to be mounted for hands-free vaccination, allowing the pig to be moved to the gun and not vice versa, a much more effective operation.

There is nothing worse than trying to work with pigs in a gloomy, badly illuminated piggery. Fortunately, today there are many companies selling LED lighting, several of which were exhibiting at the Pig & Poultry Fair. LED lighting has many benefits, including lower running costs, greater life and are instantly bright.