There might be rough times ahead in terms of global pig prices, according to pig market expert Dr John Strak. In his quarterly review of the world pig market, he warns for a bumpy ride ahead.

This is my third attempt at bringing you an overview of what is happening in global pig and pork markets. I began writing for Pig Progress about the ‘global scene’ last September and followed up in January this year with a review of 2017 and a look ahead to 2018.

In both of my previous pieces I was bearish about pig prices and, at best, suggesting that caution should be the theme of businesses involved in any aspect of pig production. With hindsight and (more importantly) fresh data, all of those comments seem appropriate now. Pig prices in the major markets have been weak or falling in the first quarter of 2018 and this is despite economic data for most countries that imply growth in consumer incomes and confidence.

It may be that farmers and the economic actors in the pigmeat supply chain have decided that these weakening prices are merely reflecting seasonal factors. And they may be right.

But if my analysis is correct there are other forces at work as well as the passage of the earth around the sun – and that could mean a bumpy ride ahead for producers, traders and investors. Let’s update and revisit some charts that you have seen here before and see what they tell us.

What is happening in China?

First, let’s look at what is happening in China – a key component of global demand for pigmeat now but one that is the most difficult to interpret because Chinese market information is hard to verify.

The hot news this month is that the Chinese are saying that they are considering putting an import tariff on pigmeat from the USA of 25%. This would be in retaliation for president Trump’s threat of $ 60 billion of tariffs on Chinese imports into the USA.

You may remember that I warned about the possibility of a trade war with China back in January. Even before any of these threats are enacted China’s pig prices were at a 4-year low and are below the average costs of production for some producers, see also Figure 1. Confusingly, the official data for China’s breeding herd show monthly declines in the herd throughout most of 2017. 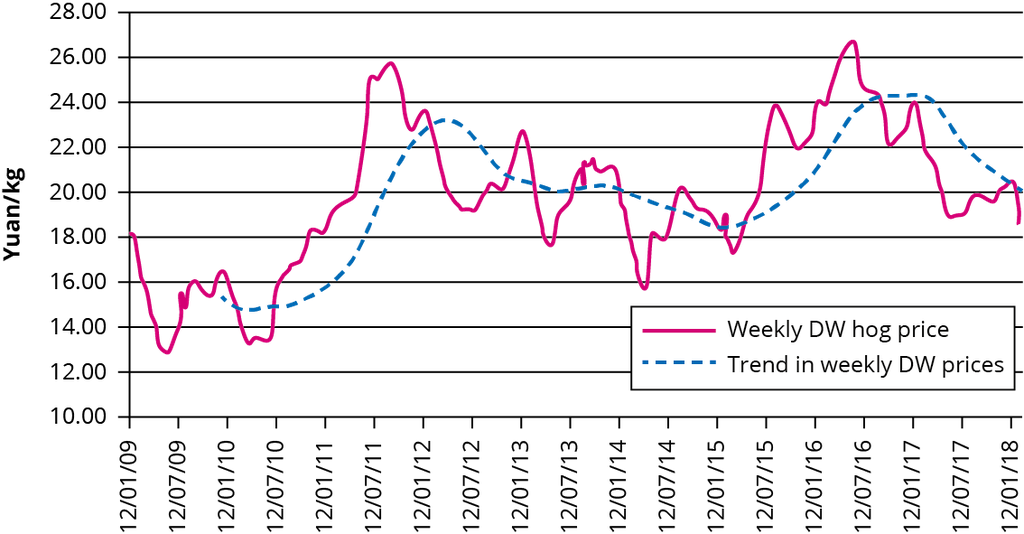 However, the trend in slaughter numbers has been upward and Chinese analysts are reporting, ‘a lot of pigs on the market’. They are also forecasting a big drop in pigmeat imports by China this year – regardless of whether a trade war breaks out.

USA: Reality is kicking in

If China can’t cheer us up then what’s happening in the New World, specifically the USA? The answer, I would suggest, is that reality is kicking in. Hog prices there are expected to fall at this time of the year, see Figure 2, but they have fallen further and faster than in previous years – as my chart shows. Easter is early this year and yet there is no clear sign of a reversal in the downward path of hog prices. 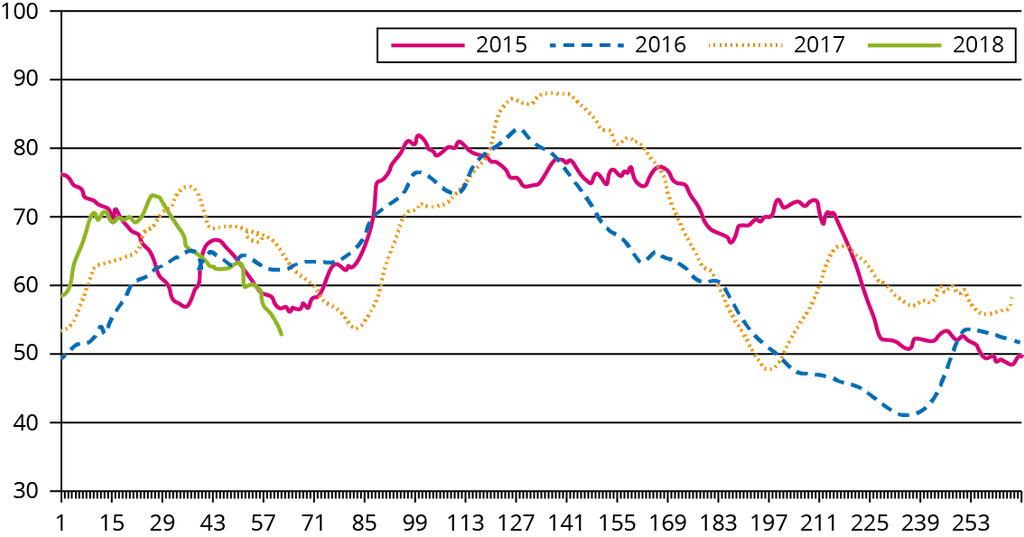 And if the expected seasonal upturn in hog prices doesn’t arrive in April alarm bells should be ringing in hog barns everywhere. Still, it’s good news for processors and packers. They will also see the latest forecasts for more hogs in the USA in 2018 as good news: supply is likely to be up by around 3% this year (and don’t forget that cattle supplies are also forecast to be increasing in 2018 so no one will be short of choices for red meat in the USA).

US packers will look at my chart for the long run trend in US hog prices and feel justified in their recent investments. There is volatility in the US hog price but nothing that a sensible application of the futures market can’t hedge against and the price trend is almost flat. 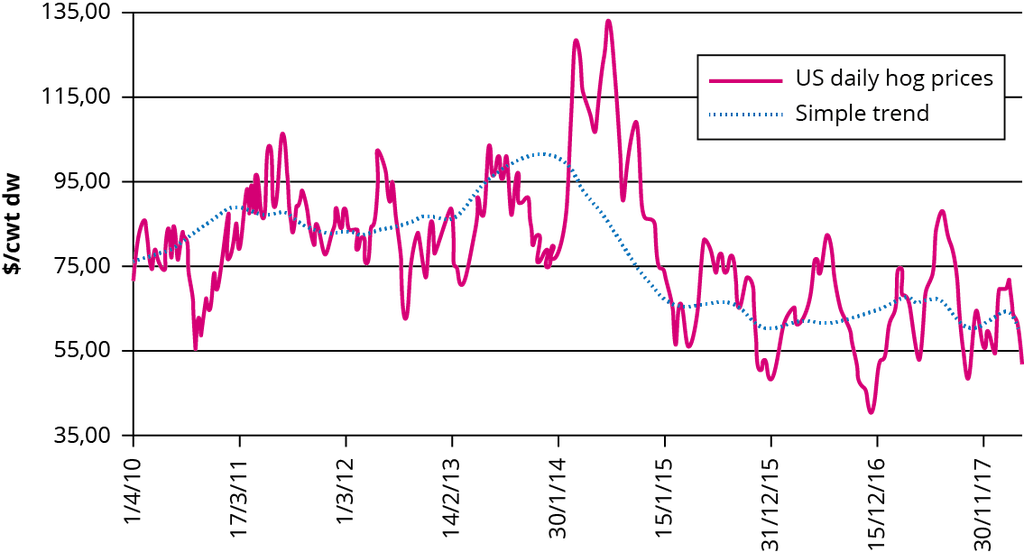 Helpfully for these packers and exporters, the US dollar now appears to be entering a relatively weak phase (aided by the US government’s record debt levels and tax giveaways) so the USA’s export customers may see some bargain prices for pork in 2018.

Sow numbers were up in Poland (+6%) in the Netherlands (+4%) and in Spain and Denmark by 3%. The German pig population was stable but the picture is clear – expansion is happening in Europe and 2018 will see more pigs and pigmeat available on the European continent. Pig prices in the EU were weak in the early part of 2018 but have rallied slightly in the second half of the first quarter. Just like the USA, the focus is now on when/if this is the seasonal upturn in pig prices which Europe normally sees.

Exports to China under pressure

Exports to China from the EU have (as with the USA’s exports to that country) been under pressure in the second half of 2017 and they were down by around 20% in January 2018. It’s not just about exchange rates – China’s demand for imported pigmeat seems to have shifted downwards.

Where does all of the above leave us? What is there to say about how the next 6 months will look for pig producers and their suppliers and customers? My view is that we will see a gently declining trend in global pig prices, also illustrated in Figure 4. 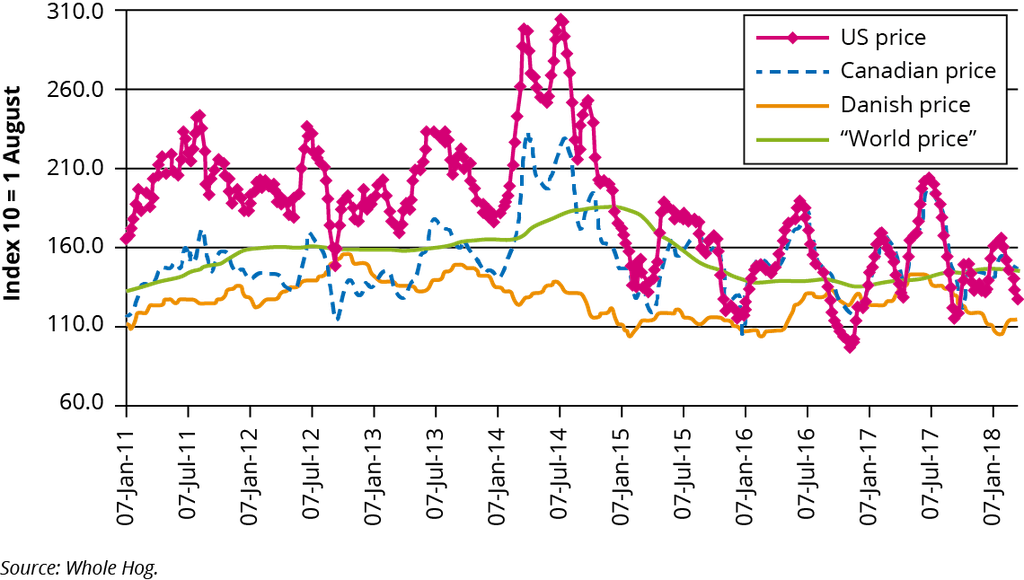 Volatile period ahead in the pig world

It will, however, be a volatile period as market prices react to rumour and counter rumour – and perhaps to the reality of a trade war. The good news is that we have been here before – trade wars involving agricultural commodities were a regular feature of the 1990s with the USA often leading the charge. But we survived that bout of political sabre rattling.

It’s also good news for those who make their living out of risk management and speculation – the futures traders will be happy with volatility. And North American and European processors should, on balance, see their profits enhanced by expanding supplies of pigmeat with falling prices at a time when demand may be weakening.

But, for anyone who deals with breeding and feeding animals, concrete, steel and the reality of investing in a farm business, it may be time to put the expansion plans back on the shelf and look for a cushion, or a seat belt, to protect against some of the price shocks that 2018 will deliver.