All news / Q3 2017: The global pork outlook has downside risk

As from this quarter, pig and pork market expert Dr John Strak will take a deep dive into the world of figures and statistics surrounding the global pig business. What’s happened over the last 3 months, and what do these figures mean for the months ahead? 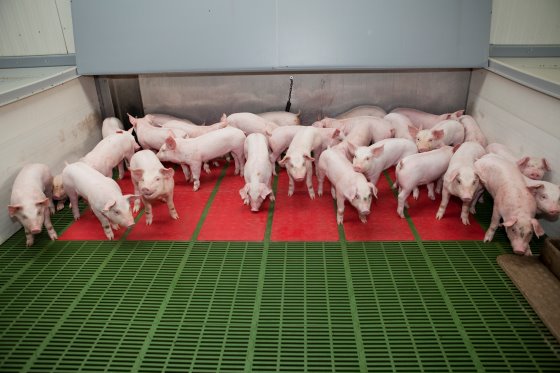 I will be writing this ‘global view’ column each quarter and it’s prudent for me to spend a few moments now on how I will approach this challenge.

What is driving the global market for pork?

First, my aim is to shed a little light on a big (and ever changing) question – what is driving the global market for pork and pig meat?

Secondly, I hope to convince my readers that they should study butterflies. Why butterflies? Well, I believe that global pig prices are often influenced by events (butterflies) that occur in different parts of the world and that understanding this is part of a successful business strategy in pig production and processing. You may be aware that the late scientist, Ed Lorenz, applied chaos theory to weather prediction and he is famous for his metaphor, ‘the butterfly effect’.

He introduced this idea in his 1972 paper, Predictability: Does the Flap of a Butterfly’s Wings in Brazil Set Off a Tornado in Texas? In agribusiness, commodity markets are often as unpredictable as the weather and I would similarly argue that ‘butterfly effects’ can influence price formation and the way that global markets behave. That’s why we should all be amateur lepidopterists – albeit being aware that some butterflies have more impact than others.

Thirdly, I will constantly remind my readers that, in the real world, recent market statistics are unreported or unverified and have to be estimated by analysts. So any forecasts of where the global pork market is heading are also forecasts of where it is now (where now is defined as the last 3 months at least).

I will give you an example of what I mean by ‘butterflies’ in the way that prices and production have been shaped in US hog farming and the global pork export trade has behaved in the last 3 or 4 years. In late 2013 and throughout the first half of 2014 the Porcine Epidemic Diarrhoea virus (PEDv) had a devastating effect on productivity in the US hog sector.

Piglets died or didn’t grow in large numbers in 2014 and US pork supplies contracted: prices and profit margins (for those unaffected by PEDv) jumped. The price windfall that went along with this was exhausted by the end of 2014 but it was a significant boost to the margins of many North American hog farmers and it set in motion a significant herd expansion.

Meanwhile, and on the other side of the Pacific, the authorities in China independently made moves to control pollution on hog farms and to discourage hog farming close to urban areas in 2015: sow numbers were cut back and pig meat supplies shrank as small scale farmers. China’s pig meat imports moved up sharply in late 2015 and doubled in 2016 as a reaction to these cutbacks in the domestic herd.

Prices and margins boosted due to China

Western exporters, however, saw their prices and margins boosted as the Chinese market sucked in imports to make up for domestic supply defects. In both these cases the butterfly effects probably seemed small initially but they had big consequences – PEDv reports on a few farms in Ohio in mid-2014 eventually led to several million pigs dying (circa 5-7% of the inventory according to the USDA), and decisions taken by bureaucrats in Beijing on new rules for hog farm pollution caused Chinese sow numbers to decrease by double digit percentages and this caused the import bill for pig meat in China to double in 2016. 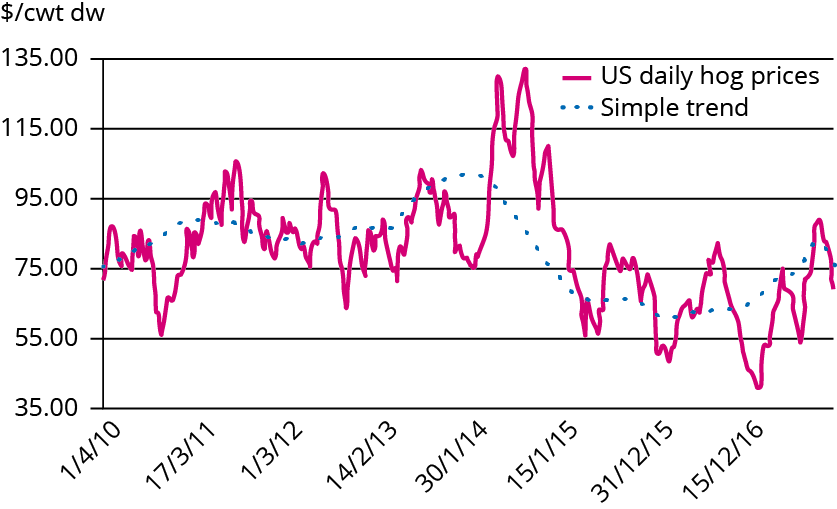 Figures 1 and 2 illustrate the pattern of US hog prices and the Chinese imports of pig meat. The effects I have described are quite clear. In essence, the 2 ‘butterflies’ I refer to above were the drivers for the changes in prices and Chinese imports that are shown in the charts. 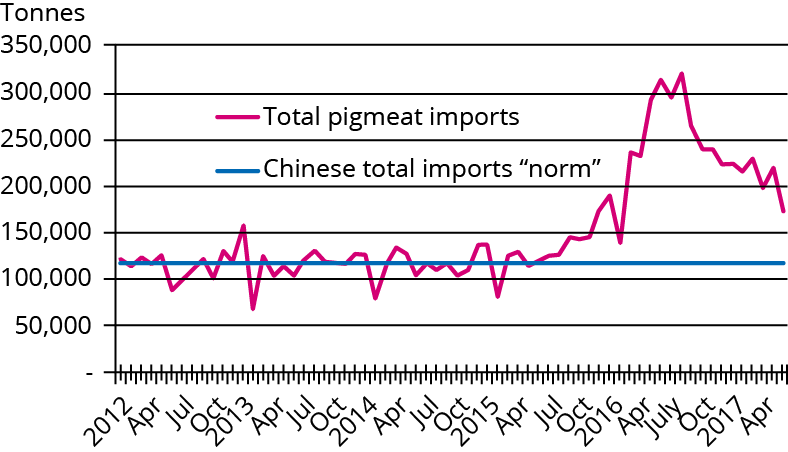 These examples of market behaviour are important because they are evidence that profits and losses were made by various parts of the global pig meat supply chain as a result of the initial events (the butterflies). This isn’t an academic exercise or an interesting piece of history.

There were real, tangible impacts on sales, prices and margins (not just for farmers, up and down their supply chains too). If that point is accepted then it should be easy to understand my urge to join the lepidopterists. What can these observations tell us about the future of prices and margins in the global market for pig meat?

I need to diverge slightly at this point because if we want to understand what changes may occur i.e. how will the status quo be affected, we need to first have a picture of the status quo. An obvious point, perhaps, but how many people have a picture in their heads (or know where to find one) of the recent and historical pattern of prices, demand and supply in their markets? And without that picture it will be difficult to interpret how any particular (butterfly) event will affect those markets. 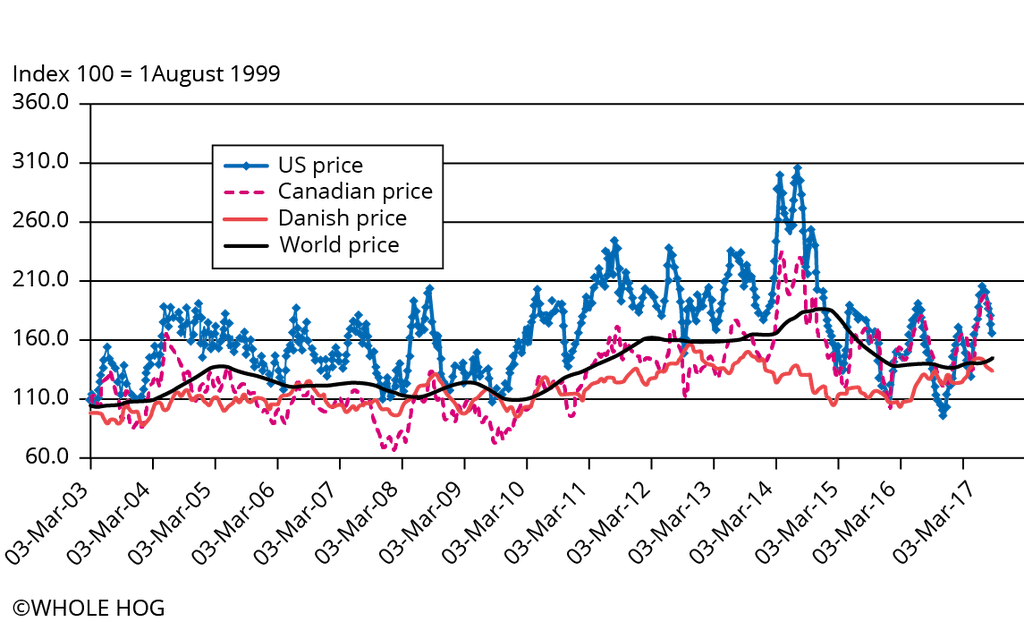 For the global market in pig meat I offer you Figure 3, a chart that attempts to summarise the key drivers/parameters of pig prices. This chart is presented here and shows the pattern of pig prices in the USA, Canada and Denmark and a weighted average of all 3 in the ‘global pig price index’ (shown here as the world price). These prices are proxies for pig prices in the 2 big exporting regions of the world: North America and the EU.

This chart has most of the components needed to identify the status quo in these regional markets. And we can see from this that, at various times, the markets are moving independently or together and are cycling up or down. When PEDv struck US hog farmers their hog prices were on a plateau/trending down, and when the import boom arrived in China European pig farmers saw their prices take an uplift (US farmers less so initially as their export plant approvals for China were not complete).

The smoothed global pig price index shows how the pig industry received a step change in prices in 2010/11, then another uplift in 2014 but it also shows signs of losing some of this gain in 2016/17. This chart will be a regular feature in this column if only to remind readers of where they are now – the status quo is a key metric when we are assessing the impact of a change.

Supply and prices in the months ahead?

Never mind now, I hear you say, where to next? How will those flapping butterfly wings affect demand and supply and prices in the months and years ahead? Well, I may not be able to say with certainty exactly where prices will be in the next 6-12 months but I do think that they will not be higher than they are now. There is more risk on the downside than there is on the upside. I say this because of the uplifts that are illustrated in my last chart. It’s my view that these uplifts – and the relatively stable world price for pigs and pig meat – have encouraged investment and improved productivity in the global pig industry.

Global supply is increasing in response to the 2 butterfly events I have described earlier and these supply changes have not worked themselves through the world market yet. The summary chart does not provide evidence for this prediction yet – but I think it will in the months ahead.