Over the last few decades, the incidence of depression has increased considerably among humans all over the globe. Things are not that different for pigs, say Russian scientists. They recently tested a new feed additive designed to make pigs happier. 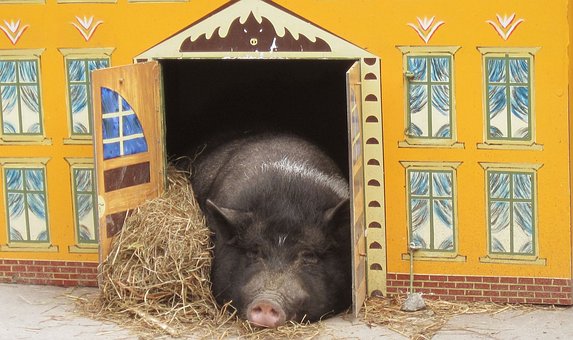 Pigs are just like humans. They experience stresses that may drive them to the edge of mental instability, says Konstantin Ostrenko, a researcher on this topic who is connected to the All-Russian Research Institute of Physiology, Biochemistry and Animal Nutrition. Modern industrial pig farms with heavy machines and a lot of noise make pigs much more prone to depression than was the case just a few decades ago. There are also many other reasons why pigs can be depressed: transfer from one group to another, changes in the diet, weaning and so on, Ostrenko says.

Anxiety and depression could make feeding less efficient, and in addition steamed up piglets can bite each other. Quite often farmers respond by docking their tails. Just like in humans, in some pigs mental problems lead to weight loss while others tend to accumulate more subcutaneous fat. These factors cause farmers substantial losses, as they get less meat of poorer quality, the Russian scientists warned.

There are three different grades of stress according to the theory proposed by a well-known endocrinologist Hans Selye, who was the first to demonstrate the existence of biological stress, says Ostrenko. In all organisms, the first and second grades are important for survival, while the third grade is different. It can increase the chances of early mortality. It is scientifically proven that all types of stress of should be avoided in pig farming, he says.

The scientists suggest feeding pigs with lithium ascorbate – a combination of ascorbic acid and lithium – in order to help their bodies to combat stress. In research, which included studies on industrial farms, the effectiveness of the lithium-
based adaptogens has been shown. Their use in animal diets contributed to improved stress resistance, endurance and it reduced aggressive behaviour, while enhancing productivity and reproduction, says Ostrenko. Animals in four experimental groups were fed daily with ascorbate lithium in powder form (see Table 1).

Each group contained ten two-month old pigs of the British Landrace breed at an industrial farm in Russia’s Belgorod region. Weighing was done before the introduction of the additive, on the fourth month and before slaughter. In addition, before the animals participated in the experiment and on the 180th day of the experiment, blood samples were taken. As a result of the impact of technological stressors, an increase in catecholamines, haemoglobin, erythrocytes and lymphocytes in the blood occurs in fattening animals, which indicates the mobilisation of energy resources as well as the bactericidal and phagocytic activity of cellular elements, the scientists report.

Basing on their findings, researchers claim that lithium ascorbate has some adaptogenic and stress protective properties and prevents a sharp increase in adrenaline and norepinephrine levels in pigs. The additive has also been found to maintain concentrations of cortisol, which is commonly believed to be the main stress factor in the bloodstream at a physiological level. The blood samples collected during the trial showed that by acting on protein and lipid metabolism, lithium ascorbate activates functions associated with the participation of α- and β-globulins in the transport of lipids, steroid hormones, and in the performance of γ-globulin protective functions. Lithium ascorbate has a positively effect on the lipid-cholesterol metabolism and antioxidant status and, as a result, contributes to higher live weights and better meat quality, the scientists concluded. In addition, in earlier research it was found that lithium ascorbate has a positive impact on sows, increasing the number of offspring and enhancing the nutritional properties of milk during lactation, Ostrenko says.

Commercial use in the pipeline

Feed additives based on lithium ascorbate are not being used in pig farming anywhere else in the world, Ostrenko says. The scientific group has already filed an application to take out a patent on the new additive, which means that commercial use of the new additive is to be expected. Some Russian pig producers have already expressed an interest in the new pig antidepressant since it is believed that the new drug could make them more competitive pricewise, including in export markets.