Russian wheat prices extended a rebound, capping the best run since April, as farmers charged more for high-protein grain after rains damaged crops there and in major competitor France.

Wheat for loading at Black Sea ports rose 1.2 percent from a week earlier to $170 a metric ton as of Friday, Dmitry Rylko, director general of Moscow-based Institute for Agricultural Market Studies, or Ikar, said by phone. The price, up for a fourth week, is for wheat with protein content of 12.5 percent. 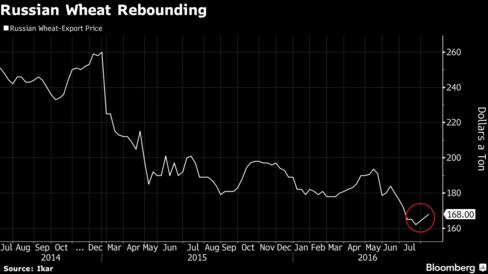 Farmers are seeking higher prices after rains this year hurt crop quality in France, the European Union’s biggest grower, and the world’s top supplier Russia, Rylko said. That helped Russian export prices rebound after slumping to the lowest in at least six years amid an outlook for a record harvest.

“Considering the situation on the market, sellers aren’t hurrying to part with high-protein wheat and will continue to hold on to it,”Daniil Tikhonov, a grain trader at St. Petersburg-based Artis-Agro Export, said by phone. “They will prefer to sell the lower-quality wheat first.”

SovEcon pegged last week’s price at $175, up $4.50 from a week earlier, the Moscow-based consultant said in an e-mailed note. Demand for Russian and Ukrainian wheat is “quite active” amid concern about crops in western Europe, it said.

Still, Russian sales may increase so farmers can finance planting and free up space to store other crops, SovEcon said. The nation has already begun sunflower harvesting, the Agriculture Ministry said on Monday.

Russia is deliberating whether to suspend its wheat-export tax for the rest of the season, with an Agriculture Ministry official confirming last week that the ministry had sent such a proposal to the Cabinet. He didn’t say when the decision on the levy, designed to keep down domestic prices, may be made.

In Ukraine, prices for wheat with 12.5 percent protein content rose 1.2 percent from a week earlier to $172.5 a ton as of Thursday, also climbing for a fourth week, according to Kiev-based UkrAgroConsult. Prices from the Russian and Ukrainian research companies are on a free-on-board basis.

Wheat for delivery at the French port of Rouen with a minimum 11 percent protein content fell 1.8 percent last week to 166.73 euros ($188.79) a ton, according to data from FranceAgriMer. That was the first weekly decline in three weeks.

Just 33 percent of French soft wheat was in good or very good condition as of Aug. 15, unchanged from a week earlier, according to FranceAgriMer. The country’s farmers had almost completed harvesting, the crop office said.