Sergey Dankvert, the head of the Rosselkhoznadzor, announced an increase in demand for Russian immunobiologicals, such as animal vaccines. 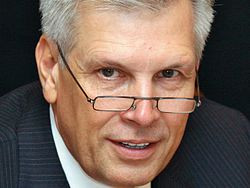 “It should be noted, that the demand for Russian immunobiologicals has risen significantly lately, as Rosselkhoznadzor and domestic manufacturers have launched outreach activities among vets, explaining the advantages of our animal health products over the foreign ones,” – Sergey Dankvert said in interview with TASS.

The head of the Rosselkhoznadzor pointed out that there are replacements for practically any foreign-made animal vaccine in Russia. “We’re especially good at autogenous vaccines production, which is usually carried out at the occurrence of infection, consistent with its type,” noted Sergey Dankvert.

Autogenous vaccines are produced by the Federal Center for Animal Health (FSBI ARRIAH) of the Rosselkhoznadzor. “It is a specific vaccine developed for a particular company, which allows us to ensure a very high efficiency of this product. In fact, commercial animal health products, which are mass-produced and widely applied in any country, contain common variants of strains. When we develop autogenous vaccines, we use specific strains collected on the territory of a particular farm.” Alexander Kononov, head of Department of Biotechnology and Viral and Bacterial Product Development, explained to Veterinary and Life.

In regard to the reliance of Russian farmers on foreign-made animal health products, Sergey Dankvert noted, that Russia has a tradition of using foreign-made drugs. “Because they are considered to be better. It is mostly due to the extensive advertising campaigns and activities of western marketing experts, who have been taking our vets on cruises to expensive resorts over the past 10-15 years. These trips resulted in the adherence of our veterinarians to foreign-made vaccines,” said Sergey Dankvert. Besides that, he specified that there is no strong reliance of domestic animal husbandry on any kind of foreign-made animal health products.

“Our producers of pharmacological and immunological drugs are working hard, and the government actively supports this industry. So far, it is reliant on some foreign-made components, but that’s fine. Everyone in reliant, including Europe and the USA. It just so happens that many pharmacological substances are supplied by China and India,” explained Sergey Dankvert.

He also added that the task is set to reach an adequate degree of production independence of any external factors. “As they are absolutely unpredictable. And we will achieve this target,” – said the Head of the Rosselkhoznadzor.