The Russian meat market is based on pork and poultry. Let’s see, how these two segments are developing at the moment and what factors have an impact on their development.

According to the Department of Animal Husbandry and Breeding of the Industrial Pig and Poultry Production Department of the Ministry of Agriculture of the Russian Federation, in the first three quarters of the last year, pork production in Russia increased by 4.8%, and the increase was recorded virtually in all federal districts with appropriate conditions for pig production development.

According to the report published by experts of the Department of Animal Husbandry and Breeding of the Ministry of Agriculture of the Russian Federation, for two months of this year, production of pigs for slaughter in live weight in agricultural organizations amounted to 515.6 thousand tons, which is 12.5% or 57.2 thousand tons more than in the same period of the last year. The main increase in the production of pigs for slaughter in agricultural organizations was ensured by the Voronezh, Pskov, Tver Regions, the Republic of Bashkortostan and the Krasnoyarsk Territory.

According to the Federal State Statistics Service (Rosstat), the average prices of agricultural producers for sold pigs in live weight in February 2016 in Russia amounted to 87.6 rubles/kg.

Director of the Department of Animal Husbandry and Breeding of the Ministry of Agriculture of Russia Vladimir Labinov noted that now we can observe a fairly steady growth in pork production in farms of all forms of ownership throughout Russia in general.

In principle, a steady growth in pork production is observed in Russia over the last years - from 2009 to 2015, the growth rates being steady and consistently even. This suggests that pig husbandry is developing gradually, systematically, and the process itself is irreversible.

The volume of import of pig husbandry products, according to the Ministry of Agriculture at the end of 2015, is declining in all fields - both import of proper pork - by 60% in relation to 2014 and processed products.

Poultry husbandry is the industry, which has been a “locomotive” of the whole livestock sector of Russia for several years already. The average annual growth rates of poultry meat production in 2010-2015 were 10%, and the poultry meat consumption continues to grow in the crisis period.

According to the IndexBox data, the total poultry production growth based on the results of 2015 amounted to 11% YoY. Experts note that the decline in real income of the population by 4% in 2015 did not reduce the demand for poultry meat, but spurred it, because poultry remains the most affordable type of meat.

Almost the entire volume of production is accounted for by chicken meat: meat of turkeys, ducks and geese is produced in much smaller quantity. However, according to IndexBox analysts, production of turkey meat is growing. They say that after 2018-2019, turkey meat will have good market prospects due to its dietary qualities.

Among product categories, the main volume of production is still accounted for by fresh and chilled meat: in the 4th quarter of the last year, this indicator was 64% of the total production in kind (data by the IndexBox research company). The absence of structural changes in production by product categories is explained by the steady demand from consumers. 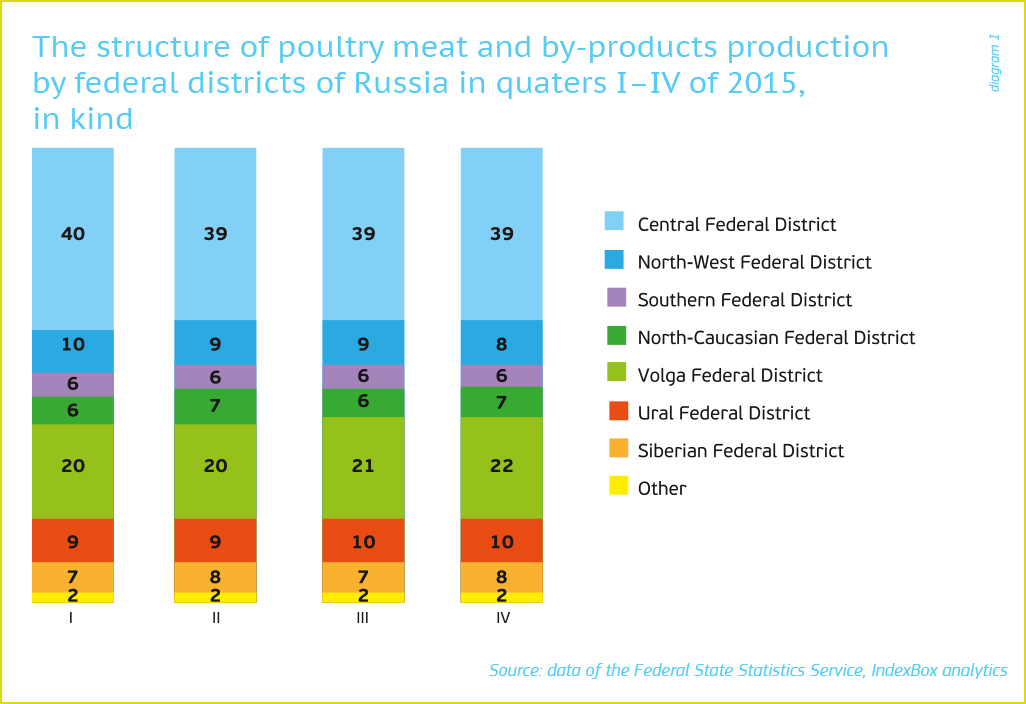 Today, Russia is actively pursuing a strategy of cooperation, including in the agricultural sector, with the Association of Southeast Asian Nations (ASEAN).

According to the International Cooperation Department of the Ministry of Agriculture, at the beginning of this April, the first meeting of senior officials of ASEAN - Russia for agriculture on the level of deputy ministers was held in the Russian State Agrarian University - Moscow Agricultural Academy named after K.A. Timiryazev. On the Russian side, the meeting was chaired by Sergey Levin, Deputy Minister of Agriculture of the Russian Federation.

The parties discussed topical issues of cooperation in the agricultural sector, in particular, summed up the implementation of the work program of Russia - ASEAN cooperation in the field of agriculture and food security for 2013-2015 and approved the new program for 2016-2020.

In the course of the meeting, the participants agreed that, in addition to the further expansion of scientific and technological cooperation, Russia and the ASEAN countries would pay special attention to the development of trade and economic relations in the sphere of agriculture.

According to the Agriculture Ministry of the Russian Federation, at the moment, the volume of mutual trade in agricultural products, raw materials and food between Russia and ASEAN is only 12% of the total trade turnover with this group of countries. With that, the share of ASEAN countries in the structure of Russia’s foreign agricultural trade does not exceed 4%, and the reverse indicator is even smaller, since Russia’s share in the export of agricultural products from ASEAN countries by value is about 1%.

According to the Russian Ministry of Agriculture, currently, given the introduction by the Government of the Russian Federation of an embargo on certain types of agricultural products, raw materials and foodstuffs from countries that supported sanctions against Russia, a unique environment for development of trade and economic cooperation between Russia and ASEAN countries has been created.