All news / Pig crisis due to oversupply, not due to Russia

The current European pig crisis is mainly caused by overproduction, and not by the Russian ban on agricultural produce. 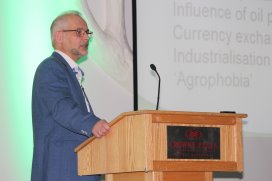 That is the view of Robert Hoste, pig production economist at theAgricultural Economics Institute (LEI) of Wageningen University and Research, the Netherlands.

Hoste spoke last week at the annualEuropean Pig Producers congressheld in Dublin, Ireland. One of the major themes these days in Europe's pig industry, is the current price crisis, as the business hasn't been a profitable one for a while – with ongoing low prices per pig and ongoing societal demands for investments.

Often the situation with Russia is blamed for this crisis, as this country has closed its borders for agricultural produce from the European Union (EU) since African Swine Fever entered various states in the east of the EU in 2014.

The geopolitical tensions around Ukraine have further worsened the trade relationships. It is not clear if or when borders would be reopened. As a result, the European pig industry needed to find new markets, which are not always easy to come by.

Key to Hoste's story was that over the years, sow productivity in Europe has seen a continuous increase, with ever-growing numbers of piglets raised per sow per year. The consequence of this development is that fewer sows would be needed to achieve a similar production – and as a consequence, total sow numbers have gradually come down in the last decade.

Hoste said, "There is a need for an annual reduction of EU sow numbers of about 2 or 2.5% for constant production."

Alternatives for the European pig industry

His presentation focused on where to turn next for alternatives for the European pig industry. He discussed alternatives like additional exports or focusing on third market exports.

He suggested a focus on the EU home market might be the best future bet for pig producers. This market is demanding added value in the form of high quality meat, here a difference can be made.